The University Language Centre occupies a large building with a long and complex history.
The original nucleus of what was to become the Language Centre was the Convent of Saint Cecelia, founded in the 13th century. Some tracts of sandstone wall are all that is left of the original Monastery which fell into complete ruin when the order of nuns died out. Permission to rebuild the convent was granted and work ended in 1571. The building was then renamed "Santa Maria della Pace" (Saint Mary of Peace) to commemorate the Christian victory over the Turks at Lepanto that year. 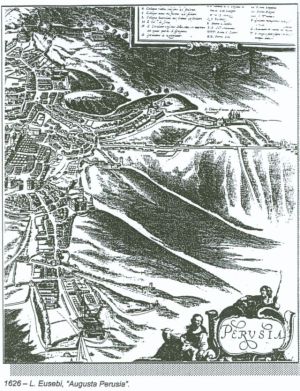 The next phase in the history of the building begins in the second half of the nineteenth century, when the "Hospital of Mercy" sold it to the director of the lunatic asylum of Perugia, Dr Francesco Bonucci. Between 1891 and 1894 the property was transferred from the Bonucci family to the Province of Perugia, which was planning to extend and develop the socio-sanitary structures of the nearby Saint Margaret Lunatic Asylum. The building then became the so-called "Bonucci Pavilion" or "industrial colony" of the women’s section of the hospital.

Structurally, the new Pavilion was certainly much like the older convent, but the decoration, internal distribution, and architectural features of the building were all added at the end of
the nineteenth century. New facilities were also added, such as a mill, a bakery, an area for making pasta, a linen-room, textile laboratories and kitchens. In the 1920s, these additions allowed the asylum to become economically self-sufficient.

In 1928, a theatre was built seating 300 people and in 1936 it was fitted with a cinema. At the same time a coffee bar and a small grocery shop also opene
d. The building fell into disuse in the 1970’s and was utterly abandoned in 1980 as a result of the closing of public psychiatric hospitals.

Today the large building occupied by the Language Centre is, therefore, a rich historical and architectural tapestry in which the traces of the multiple elements contributing to its construction and change over the centuries can still be seen.